Top
READY TO START YOUR ROUTE TO HEALTHY LIVING?
Let's Do This!

What is ACV and the brand?

Apple Cider Vinegar is made from fermented apples and water, and contains antioxidants, acetic acid and amino acids. Diluted ACV contains zero calories per tablespoon, as well as no fat, carbohydrates, protein, or dietary fibers. Bragg Apple Cider Vinegar is made from the organic apples and container the ‘Mother,’ home of organic acids and enzymes.

What are ACV benefits?

There are sooo.many.benefits to Apple Cider Vinegar and I bet way more than you even heard of!

*It is something you must be consistent with, just like most things if you want results and its full benefits.

Why do I use ACV?

I want to say this is approx. my third+ year at taking ACV and yes, I have been consistent in travels. Either I brought it with me if I was driving or I bought it as soon as I landed at my destination. The main reasons I have chosen to add ACV to my daily rituals is for a couple reasons. We already know all the benefits listed above. But the primarily benefits that I’ve chosen to take advantage of is; help control my insulin/ blood sugar, preventing the overgrowth of bad bacteria, and overall balance my PH levels.

How do I use ACV?

ACV is not only used orally; it can be used on skin as stated above with bruising, but also on face for acne, and spray on scalp for dandruff. WARNING: it does have a strong smell to it. Haha I personally choose to take it orally, I would assume it is entering my bloodstream, allowing to help my body in a variety of aspects.

I do not take it on an empty stomach as my stomach doesn’t handle it very well (tried it once and immediately felt like a morning sickness; hot, dizzy, nauseous) Therefore, I eat my breakfast, drink coffee, vitamins, 1 TBSP Apple Cider Vinegar then immediately brush my teeth. That is the AM Routine, where as the PM Routine consists of eating my last meal, drinking my chicken bone broth, taking evening vitamins, followed by 1 TBSP ACV then immediately brush my teeth. This is because Apple Cider Vinegar can affect your tooth enamel if left on your teeth for longer periods of time. (& yes, I will notice my enamel on my teeth if I do not proceed in the teeth brushing after taking the ACV within the first 3 days).

There is no magic pill, but if you like what you hear, or suffer from one of the many listed above, give it a try, and add it into your daily rituals. Here is the exact one you should get: 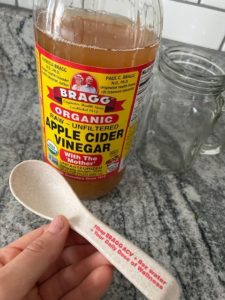 Bragg’s will tell you not to take it as a shot because they have to say that. Just like a medicine bottle must provide its side effects. They suggest you do not take it as a shot and dilute it using 1 TBSP per 8 oz of filtered or Sparking Water because they say its better on the esophagus that way and too harsh otherwise. Which I agree to an extend; if I were taking more than 2 TBSP per day than perhaps, I would be a bit more concerned on how I am taking it. But as I explained above, I take 2 TBSP MAX per day: one AM & one PM.

Can also be found in Walmart, Shop Rite, other stores

FYI even after 3 years I still make this face EVERY TIME I take a “shot” of ACV  HA. 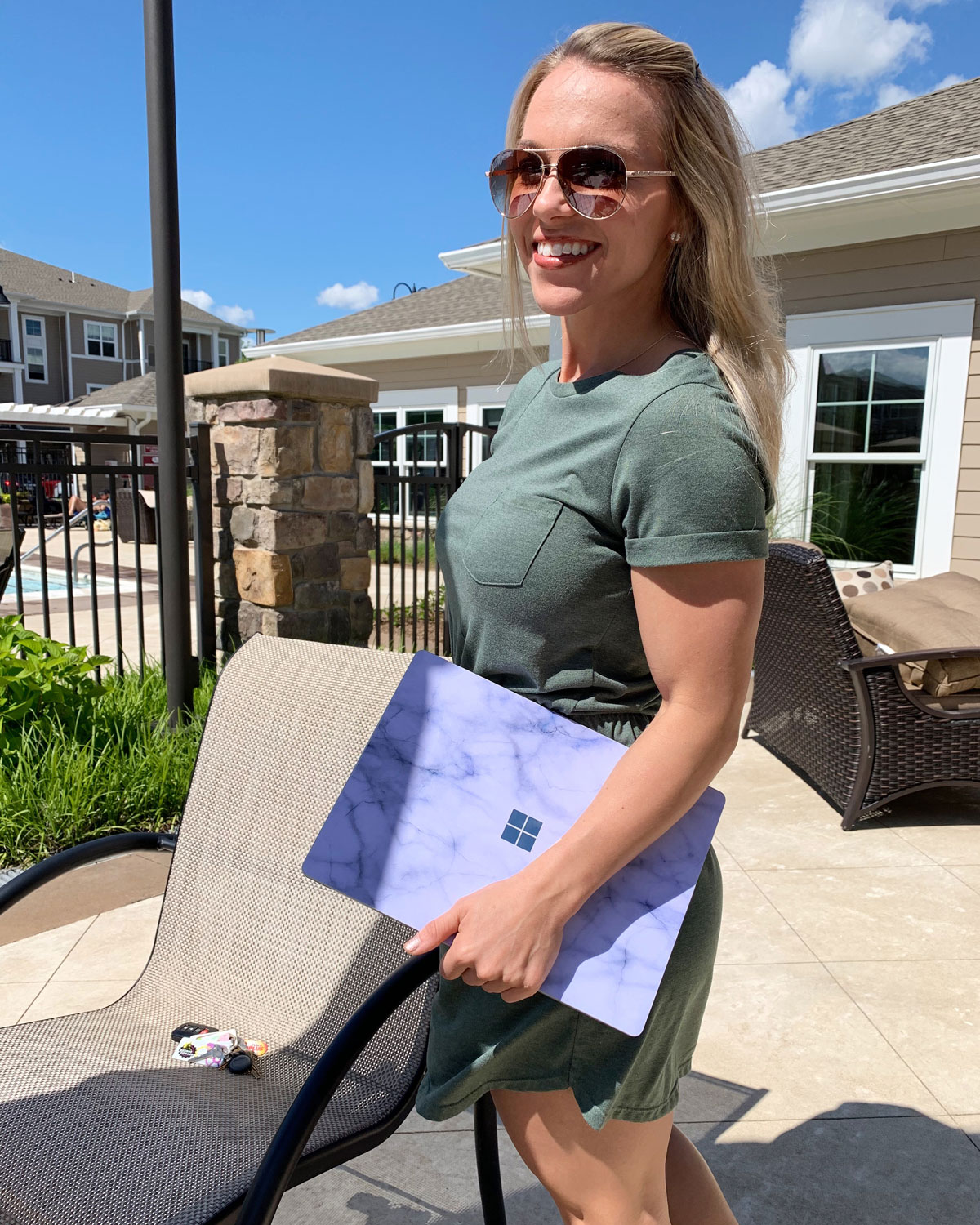 I've been going to Marisa for awhile when I'm either in some type of pain or just in need of...

I've been going to Marisa for awhile when I'm either in some type of pain or just in need of a massage. She's extremely knowledgeable in what she does; gives me a lot of advice if a body part hurts and what I can do at home to help. I've also joined her New Years challenge; definitely has helped me stay in the right path. My last massage experience I actually fell asleep on the table because it was so relaxing!! HIGHLY RECOMMENDED!
https://msfitriss.com/testimonials/2384/
Marisa is a multi-talented and experienced professional. I am a massage client of Marisa’s and consistently benefit from her overall...

Marisa is a multi-talented and experienced professional. I am a massage client of Marisa’s and consistently benefit from her overall wellness knowledge, massage technique, and positive spirit. Each session, she is committed to creating a spectacular massage experience from the moment you arrive until you are walking out the door. I admire her professionalism, talent, and commitment to the customer experience. She lives her values in all that she does and as a result she has earned my trust and endorsement! To Marisa’s continued success!!
https://msfitriss.com/testimonials/2385/
I participated in Marisa’s Challenge from March to May this year, participating in this challenge was more of a learning...

I participated in Marisa’s Challenge from March to May this year, participating in this challenge was more of a learning experience for me. I wasn’t a big eater as I was always busy and just would have another cup of coffee versus having a nice meal because it was quicker. Marisa taught me how to balance life while eating well and maintaining balance. My big Challenge was I wanted to make sure I could still enjoy life by eating fun food, having a nice relaxing cocktail while still balancing portion and healthy eating while getting in a workout 5 days a week. And She taught me just that! I learned to do that, While loosing 10 pounds! I am not ending this life style today I am Continuing it and shooting to loose another 20 pounds but will be over the moon to at least get another 10! I am very happy with how far I come, and I have Marisa to thank for that. Work with her whether it’s to loose weight, learn how to balance a healthy lifestyle, or even gain muscle and become stronger, don’t look further Marisa is your girl!
https://msfitriss.com/testimonials/688/
I trained with Marisa for 3 years. She is amazing. Highly professional and very quick to return any nutritional or...

I trained with Marisa for 3 years. She is amazing. Highly professional and very quick to return any nutritional or other questions I had. I still will only go to her for my monthly massages because they are simply the best I have ever had. She is a wealth of knowledge when it comes to every day life and fitness goals!
https://msfitriss.com/testimonials/2386/
I've been going to Marisa for massage therapy since the beginning of 2018 and she's my go to massage therapist...

I've been going to Marisa for massage therapy since the beginning of 2018 and she's my go to massage therapist when I know its time for my muscles to decompress. Marisa's background and experience in fitness and personal training really stand out from the rest of massage therapy that I've had in the past. And as a fitness enthusiast that lifts 6x/week, that's the best combination for me personally. From my very first massage therapy session with her, I felt like she was communicating with my muscles without me even saying much. It's like she was sensing and adjusting based on the feedback on how my muscles were reacting. I bring that up every session because I think that's an incredible skill. If you want to talk during your session, she will talk. If you just want to relax and shut eye, that's fine with her too. Very professional. Sometimes she runs promotions and specials during the holiday, I would definitely take advance of that. Schedule a session with Marisa and you'll know what I'm talking about!
https://msfitriss.com/testimonials/689/
5
0
Ms Fit Riss

Quote of the Day

Is stretching part of your exercise routine & plan

You’ll want to SWIPE & SAVE this one LOWER BODY

If you are a mom, you are my biggest inspiration.

Will Squat for Donuts 🍑❗️ & not just any do

10 years ago I owned a shirt that said “living f